Seth Rogen Replaces Morgan Freeman As The Voice Of Trains, Buses In Vancouver

Famous comedian and Vancouver-born actor Seth Rogen has recorded public announcements for SkyTrain and buses in his hometown.

The announcement of Rogen's appointment as the new voice of Vancourver's public transit came when he was offered the role to replace Morgan Freeman, TransLink's previous voice talent.

Freeman's campaign was pulled off after he was accused of verbal and sexual harassment by eight women. According to reports, the esteemed celebrity subjected them to inappropriate comments about their bodies, and even harassed them on press junkets, and on the set of his movies at his own production company Revelations Entertainment.

One woman who claimed to be harassed by Freeman worked as a production assistant in 2015 in the set of Going in Style reported that the actor touched her inappropriately on set, and even commented on her clothing and figure for months. On one instance, Freeman continuously tried to lift her skirt up to see it she was wearing underwear. Alan Arkin, his costar allegedly told Freeman to stop.

Another woman who worked as a production staff on the 2012 film Now You See Me said that the celebrity harassed her and an assistant. He even made obscene comments about their bodies. She also added that if they knew that he was going to come on set, they would not wear anything that would show their breasts, their bottoms, or wear anything that is fitted.

Freeman said in a statement that anyone who knows him would know that we would not offend someone intentionally or knowingly make someone feel uncomfortable. He also added that making anyone feel uneasy or disrespected was never his intention.

Vice president of customer communications and public affairs for TransLink, Steve Vanagas, said that the idea to hire Rogen largely came from social and local media.

Stephanie Ip, who works as a reporter in the area said that she would happily listen to the celebrity on all her transit stops if the announcement came with his iconic laugh. Rogen responded to Ip's tweet, and then TransLink. A couple of months after, the company made the official announcement of getting Rogen onboard.

In a released video announcement, Rogen said that he has been taking public transit his whole life and still use it whenever he is in the area. He added that when he was asked to become the voice of public transportation, he was excited. Rogen is always looking for methods to participate in Canadian culture and highlight his country.

Vanagas stated that TransLink got the comedian in an effort to give a better and more effective experience to share pride in Vancouver. The company announced that people will start to hear Rogen's voice in its system in the coming weeks, although it is still unknown whether or not his famous laugh will be included in the announcements.

Australia To Ban Sex Offenders From Traveling To Southeast Asia 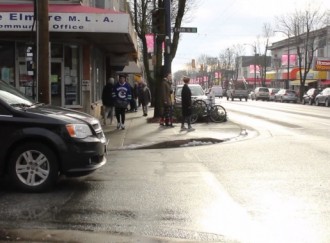