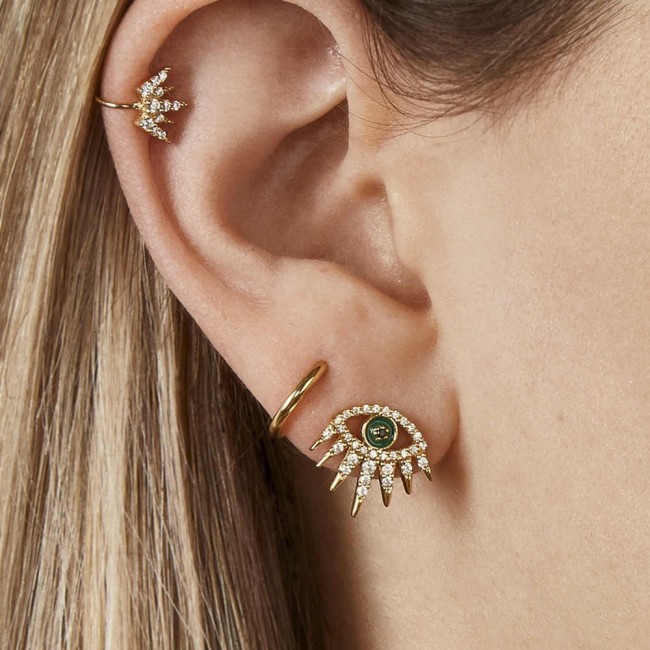 When people see the eye on a piece of jewelry, they usually have one of these two feelings - admiration or puzzlement. Nevertheless, such an original symbol, just like many centuries ago, is one of the fashion staples.

The Meaning of the Eye in the Ancient World

The eye is not only an organ of vision, it is also a powerful and very ancient symbol.

The first eye amulets belong to the Ottoman Empire and date back to 3300 BC. Just imagine how many centuries this versatile symbol has been around, guarding and protecting its masters!

In ancient Egypt, the eye was depicted on headstones to aid the dead in the afterlife. Another ancient Egyptian eye, Wadjet (aka the Eye of Horus) often blazoned on the bows of boats to keep them on track. Thanks to the alleged power to protect, heal, and give strength, Wadjet was quite common in ancient Egypt. Both rulers and commoners revered it.

In another antique state, Ancient Rome, people wore gold and silver beads shaped like human eyes. They were supposed to protect a wearer's vitality from negative external influences and dark magic.

Apart from the protective function, the eye symbol in jewelry served as proof of friendship or belonging to an alliance. Sometimes, it doubled as a reminder of a person who is not around. If this person passed away, the eye was drawn alongside clouds, which symbolized the passage to heaven. Sometimes, this image was surrounded by pearls as a symbol of tears.

The evil eye symbol was a powerful ancient talisman in Portugal, Albania, Tunisia, Turkey, Greece, Israel, Saudi Arabia, Nepal, and dozens of other countries. Such different cultures and religions have one thing in common: they believed that the eye safeguarded its owner against negative energy. Despite the fact that it is called the Evil Eye, it was actually a barrier from malevolent glares. In antiquity and at the present time alike, there is a tradition to adorn these magical amulets with precious or semi-precious stones to amplify their power. The most popular jewels are onyx and lapis lazuli. If you, too, are looking for a guard against someone's evil eye, you can count on the powerful amulet steeped in history.

About 200 years ago, the European nobility popularized jewelry featuring a human eye. At first, this trend dominated in France, and later it spread to England. Jewelry of that period encapsulated drawings, or rather portraits, of a loved one. These portraits mounted in pendants, brooches, or rings often carried inserts of precious stones. As a rule, the eye was drawn in watercolors or gouache on ivory or parchment, and then it was placed into a body ornament.

Jewelry displaying a human eye got a poetic name lover's eye. It obtained its moniker in 1785 when the Prince of Wales secretly handed Mrs. Maria Fitzherbert a miniature of his own eye. After this, an aristocratic fad gained popularity in the affluent stratum of society. To be fair, portraits of a lover's eye were rather rare. More often than not, those images depicted someone from the family or children.

One of the most famous pieces of eye jewelry is Salvador Dali's brooch dubbed "The Eye of Time". The famous artist made this eccentric item for his wife Gala in 1949. One of three pieces is now on display at the Fundació Gala-Salvador Dalí in Figueres, Spain.

Modern designers often refer to the theme of the eye in their collections. Large, luxurious Egyptian-style eyes made of gold, diamonds, sapphires, amethyst, turquoise and other gems can be found in the Fascination collection of French designer Sylvie Corbelin. Toronto-based jewelry designer Holly Dyment rolled out numerous collections of enameled rings and brooches. They carry images of wide open, squinted, and seductively ajar eyes. Solange Azagury-Partridge, known for her bold designs and a humorous approach, introduced her own vision of eye rings and pendants. Their highlights were eye shadows made of enamel as well as emerald and ruby pavé settings.

The most extensive jewelry interpretation of the eye came from the fashion brand Lito and its "Tu es partout" ("You are everywhere") collection. More than 80 pieces of eye-shaped gold jewelry carried vibrant enamel and diamond inlays.

Another curious collection was brought to us by American jewelry designer Suzanne Kalan. The Evil Eye Fireworks pieces have turquoise for the pupil and the rest of the eye is set in baguette-cut diamonds. In early 2020, the designer released the Evil Eye Rainbow Fireworks collection in white, yellow, and pink gold complemented with emeralds, as well as pink and blue sapphires.

As you can see, the eye isn't a long-forgotten symbol. If you are looking for a powerful talisman or just an eye-catching trinket, you can fully rely on the stylized image of a human eye.