The United Kingdom itself is a truly busy place compared to its American counterpart. London's Heathrow airport is one of the world's truly busy airports with both short and long-haul flights coming from all directions. However, it is only one of the five busiest airports travelers have to contend with in Europe.

According to Travel and Leisure -- citing information from the Airports Council International Europe -- Heathrow Airport in London is Europe's busiest servicing more than 75.7m in 2016. The airport is likely still servicing more passengers. ACI's 2015 figures indicate Heathrow Airport's passenger base had grown over 1 percent. In worldwide rankings, Heathrown ranks as the 7th busiest airport in the world.

The ACI's report cited by Travel and Leisure indicates that France's Charles De Gaulle Airport in Paris comes second with 65.9m and indicates a 0.3 percent growth. Paris -- despite terror attacks deteriorating its tourism industry -- still receives high traffic from businesses and travelers from America and Asia. Based on world rankings according to Airports in Europe, Charles De Gaulle is the tenth in the list of the world's busiest airports.

ACI's data indicates that The Netherlands' Amsterdam Airport had grown immensely by 9.2 percent compared to data from 2015 with a 63.6m record number of travels to and from the country. Boasting beautiful architecture and a laid-back approach to tourism, the Dutch travel central is also the first stop and final waiting of foreign travelers who had enjoyed the country.

German tourism is booming and expatriates are greatly considering the country for vacations and eventual residency, which makes Frankfurt Airport the 4th busiest airport in the country handling 61 million arrivals and departures in 2016. The amazing number of sights, notably the historic and cultural tourism of Germany, along with its festivals last year, made it one of the most-visited countries for 2015.

Making it to the top five, before Turkey had encountered extreme terrorist acts in its capital, the Istanbul Alaturk Airport was extremely busy with 60 million passengers going to and from the country. Turkey is a common retreat for Europeans because of its relaxing atmosphere and great number of relaxing sights and bustling nightlife.

London's Heathrow Airport Leads The Five Most Busiest Airports In ...

Norwegian Airlines To Introduce Cheap Travels To Ireland, Greece, and ...

Five Of The Best Portable Gaming Consoles For Travel

The Ark: What You Need To Know About JFK Airport's Animal Terminal 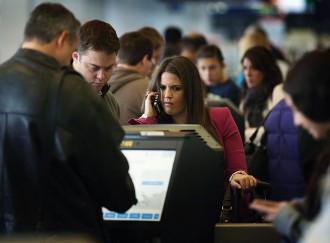