There is one more reason to book a ticket to Rome immediately. Tourists can now experience the Opening Games at the Colosseum just like before.

Although time travel still might not happen in the near future, a brand new show in the Colosseum will give people a glimpse of it.

Called the Sangue e Arena, which translates to "blood and sand," the production will show the inaugural games that happened in 80 A.D. to celebrate the completion of the world famous amphitheater.

Travel Back In Time

The show will give its spectators an authentic feel of the lavish, and sometimes grisly, games that were commissioned by Emperor Titus. It includes gladiatorial combats, animal fights, and naval battles. The production will make use of elaborate lighting, high tech visuals, realistic sound effects, and holograms.

The immersive shows will run every Thursday, Friday, and Saturday, until Oct. 27.

City Archaeological Director Alfonsina Russo said that with the show, the great Colosseum will finally re-claim its purpose as a place where people could go for entertainment and performances.

Sangue will allow the people to experience the same emotions felt by the ancient Romance, which includes the thrill of seeing amazing animals arrive in the arena, and the courage shown by the brave gladiators.

She added that the goal is for the Colosseum to become a place where tourists not only visited but also experienced.

The reign on Titus came with disasters such as the outbreak of a plague, a catastrophic fire in Rome, and the eruption of Mount Vesuvius. According to scholars, the over-the-top games, which lasted more than 100 days, were organized in order to pacify the people's restlessness and disillusionment.

Other Multimedia Shows In Rome

The city of Rome is not a stranger to history and multimedia mash-ups. Now on its fourth year, Viaggio nei Fori lets its viewers experience the Imperial Fora by using state-of-the-art technology that would take spectators back to the Rome of the Caesars.

People who want to see the amazing show in the Colosseum do not need to spend all their savings because the tickets are cheaply priced. There are also reduced rates for children ages six to 12 for around $26 and tickets for adults are $30. The show is not recommended for children who are 6 years old and below.

Lights On! City sparkles as Vivid Sydney lights up for 10th ...

Five Of The World's Most Popular Tourist Attractions Has Some VIP ...

Five Facts That You Probably Didn't Know About The Colosseum

Interesting Facts About Ancient Cities Around The World 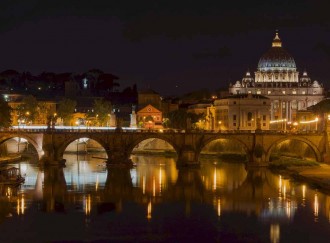