Delta Airlines is the latest U.S. airline to apologize and offer compensation to passengers being kick offed their flight and being threatened with jail time. The reason the family was kicked off the plane was due to some confusing federal and airline rules, with regards to children traveling.

According to a report from USA Today, Brian and Brittany Schear, who lives in Huntington Beach, California, was kicked off from a Delta Airline flight last April 23, together with their two-year-old child. The family was returning from a trip to Maui with their two children, but their 18-year-old son Mason flew earlier.

The report said that one of the confusing rules that resulted in the family being kicked off was the name on the ticket. Since the Schear's older son flew earlier, they used his seat for their two-year-old son, but Delta said on their websites that tickets can't be transferred and names can't be changed.

However, the Transport Security Administration said federal regulations don't prevent changing the name on the ticket, provided the new person won't be labeled as a threat by the database. Another confusing rule was regarding whether the two-year-old kid should sit in a car seat or in the lap of the parent.

The Federal Aviation Administration is urging infants to travel in a car seat for safety, but those that are at the age of two and above can sit in their parent's lap. Delta also urges parents to get a car seat for children below two-years-old, but the crew from the flight told the Schears that their child is required to be seated on their lap during the whole flight, according to Travel + Leisure.

The employee can be heard in the video that since he is two-years-old, "he cannot seat in the car seat" and should sit in the parent's lap "the whole time." In the end, though, the family was forced to leave the plane and had to look for accommodations for the night and rebook their flight, which cost them $2,000.

The report said that Delta issued an apology last Thursday, saying they are "sorry for the unfortunate experience" the Schears had with their airline. The company adds that they have reached out to the family to offer a refund to them and provide additional compensations. Check out the viral video of the family being kicked off their flight.

OnePlus 5 Confirmed To Release This Summer, Rumored To Have High-End ...

Airlines Are Not Required To Compensate Passengers For Delays Caused ...

Nissan Signal Shield Could Be The Answer To Prevent The Use Of Mobile ...

Delta Airlines Pilot Removed From Duty For Smacking Passenger, Was ... 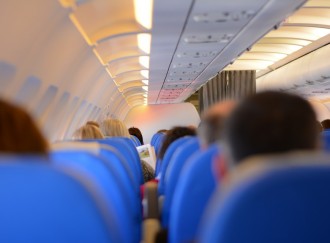