At this New Year's Eve Celebration, You Can Walk the Titanic's Grand Staircase Like Jack and Rose

"I figure life's a gift and I don't intend on wasting it," said Jack Dawson, played by Leonardo di Caprio, in the movie Titanic. And as New Year means new life, celebrate that precious gift at the Titanic Belfast in Northern Ireland by doing the re-creation of the popular grand staircase scene in the 1997 movie.

A replica of the staircase will be made available for guests. Features that will happen during the night include a New Year's Cocktail, Light Supper, Live Band, Midnight Piper, and DJ Entertainment. Visitors will get to wear in tux and cocktail dresses. An entrance fee of $50 will be charged.

Earlier this month, Titanic Belfast grabbed the award as 'World's Leading Tourist Attraction' at the prestigious World Travel Awards in the Maldives. "The Titanic story captures hearts and minds throughout the world, and at Titanic Belfast, this is no exception," said Tim Husbands MBE, Chief Executive.

Titanic, who earned the moniker of the "Unsinkable Ship" was built by the Harland and Wolff shipyard in Belfast. Its demise on April 14, 1912, was due to an iceberg.

The Titanic Belfast Museum offers guests to revisit history over a tour of nine "interactive galleries, with multiple dimensions to the exhibition, drawing together special effects, dark rides, full-scale reconstructions and innovative interactive features." People get to explore how the ship was made, what's being inside was like in "the city where it all began."

The museum is located in the right spot where the RMS Titanic and Olympic were constructed and from where ships were first launched into the water. There are also activities tailored for children and adults to enjoy the walking tour of the museum.

When asked about Titanic Belfast, even James Cameron, director of the movie Titanic, said: "This is one of the biggest and most well-thought-out Titanic museums in the world." For more information, you can visit their site here.

Irish Waiter Receives Generous $750 Tip To Help Him Visit Home For The...

The Amenities That Make ‘The World’ Luxury Residential Yacht One ... 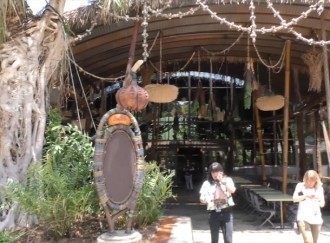 The Navi’s World Of Avatar In Walt Disney World Boasts Of Mouth-...