'The Walking Dead' News: Fans Felt Sick and Traumatized On Season 7 Premiere, Complains To FCC About The Show

Anyone who has been following "The Walking Dead" television series knows that it is pretty graphic, but this has not stopped fans and casual viewers alike from voicing their displeasure about the award-winning series to the Federal Communications Commission (FCC). Many viewers complained about how the premiere episode of season 7 was too violent it made them feel sick and traumatized.

The season 7 premiere saw the deaths of Abraham and fan-favorite Glenn in brutal fashion. While graphic deaths are a pretty common occurrence in the show, the gore depicted in the episode entitled "The Day Will Come When You Won't Be" apparently left a very bitter taste in the mouths of viewers all across America. The FCC has now released a list of the not-so-flattering complaints from fans regarding season 7's premiere episode, which has been obtained by The Daily Dot.

Some of the complaints were more about technical issues regarding the premiere episode, but most targeted the episode itself and describe it as having a sort "torture porn" status. One fan from Virginia wrote about how the show has "transformed from people killing soulless animated corpses into a sadistic, emotional torture by showing people killing other people in the most brutal and sadistic ways." The fan also addressed how the final episode of season 6 and the first episode of season 7 made them sick to their stomach. The said fan also detailed that watching an "ISIS beheading" execution video is much better than watching "The Walking Dead".

While the FCC technically can't regulate basic cable broadcasts like it does with other broadcast channels such as NBC, ABC, and CBS, networks are able to limit the type of content that they air. Shows that never display any graphic nudity and characters are almost never heard, as well as, using the "F" word on TV. These censorships are the reasons why "The Walking Dead" has two versions filmed for scenes involving the latest protagonist Negan. An uncensored version exclusive to the Blu-Ray and DVD releases, and one that is suitable for TV.

Individual fans weren't the only ones who had a bone to pick with "The Walking Dead" season 7 premiere. According to Comic Book, the Parent's Television Council (PTC) also condemned the season opener calling it "one of the most graphically violent shows we've ever seen on television..." What are your two cents on this issue? Do you think that TWD really crossed the line with its season 7 premiere?

'The Walking Dead' Season 7 Midseason Finale Update: Who Are The Five ...

Glenn Of The 'The Walking Dead' Ties The Knot With Long Time ...

The Walking Dead Ratings For Season 7 Consistently Drops! Should 'TWD... 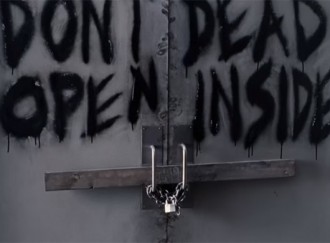 "The Walking Dead" Theme Park Will Bring You To A World Of Zombies [...