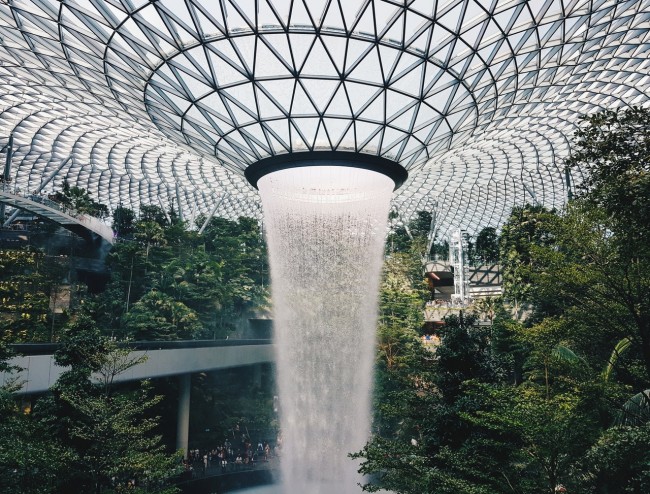 (Photo: These 5 Musical Dancing Fountains From Around The World Will Blow You Away)

Thanks to the easy availability of travel booking website templates, researching and booking your next vacation is simpler than ever. But with so much choice out there, how should you pick a destination?

For some people, beaches and natural scenery are a deciding factor. But for others, the local architecture and monuments are essential when choosing a vacation spot. If this sounds like you, don't forget fountains, which are usually free to visit and can be spectacular, particularly at night. Some fountains incorporate sound and music for a truly stunning display.

Here are the world's largest and most spectacular musical dancing fountains:

Recognized by the Guinness Book of Records as the world's largest fountain, the Fountain of Wealth is 13.8 meters tall and 66 meters wide. It is a simple but visually stunning structure, dominated by a ring of silicone bronze supported by four columns. The ring is based on a Hindu mandala design, which represents the unity between all people. It was completed in 1995 as part of the Suntec City shopping mall development.

Every evening, the fountain comes alive with music and lights. The fountain is fitted with a screen that is used during laser shows. Sometimes the fountain is switched off, and visitors are encouraged to walk around the base three times - this is said to bring good fortune. According to Feng shui experts, the flow of water symbolizes the flow of abundance and wealth.

This fountain is the largest musical fountain in the world. Situated in a 30-acre artificial lake, it is 275 meters long and shoots water over 152 meters into the air. It is located in the Downtown Dubai development and was opened at the same time as the Dubai Mall in 2009. It has been fitted with more than 6,000 lights and 25 light projectors. When the fountain is lit up, it can be seen from many miles away. The fountain's choreography goes well with both classical and contemporary music.

The fountain was designed by WET Design, the firm also responsible for designing the Bellagio Fountains in Las Vegas. It can eject 83,000 liters of water and is equipped with four different styles of "shooters" for an explosive effect.

Set on the Banpo Bridge over the Han River, which was built in 1982, the Moonlight Rainbow Fountain is the longest fountain on the planet at 1,140 meters long. Completed in 2009, the fountain ejects 190 tons of river water per minute via 760 nozzles up to a distance of 43 meters. The fountain is considered environmentally friendly, as it shoots river water, rather than draining it from an external source.

As the fountain pumps the water, thousands of LED lights lit it. Between April and October, there are music and light shows throughout the day and into the evening.

4. The Fountain of Bellagio

With its extravagance and ambitious choreography, this fountain suits the opulent city of Las Vegas perfectly. Every performance is unique, so you can visit the fountain multiple times and never get bored. The shows run regularly most afternoons and evenings. It is widely lauded as the most intricately-designed musical dancing fountain ever created, making it one of the most memorable spectacles in Las Vegas.

The fountain, which is 1,000 feet across, sends water 460 feet up into the air. It incorporates many musical genres in its display, from classical pieces to well-known pop songs. Many performers and artists have been invited to design their own shows. At Christmas, the fountain's soundtrack includes favorites such as "Sleigh Ride" and "The Most Wonderful Time Of The Year." There are several restaurants near the fountain, so you can enjoy a meal whilst taking in a fabulous view.

5. The Magic Fountain of Montjuïc

The Magic Fountain of Montjuïc was opened in the 1920's. Carles Buigas, the designer of the fountain, had an ambitious vision of it. Some people derided his plan as unrealistic. However, the fountain was completed in time for the Great Universal Exhibition of 1929, when it was revealed the day before the Exhibition opened. Over 3,000 workers created the fountain in less than 12 months.

Renovated in the 1980s, after sustaining damage in the Spanish Civil War, the fountain is now the centerpiece of regular weekend shows. It was further restored in 1992, in time for the Summer Olympics held in the city of Montjuïc. The fountain's 3620 water jets shoot 700 gallons of water per second, with the tallest jet standing at 170 feet.

With so many dazzling fountains around the world, it's well worth making time to visit one on your next trip. Just be careful when posing for photographs, or you could be soaked!