"A wolf in sheep's clothing" is not meant to be taken literally. However, in a Cairo zoo, a similar case might have happened.

A zoo in Egypt has been reported of trying to fool its guests by painting a donkey to have the same stripes as a zebra. Despite accusations, the animal sanctuary director insists that the animal is a real zebra.

Eighteen-year-old Mahmoud Sarhan was visiting a newly opened zoo located at the International Garden municipal park when he came by a weird-looking animal.

According to Sarhan, the animal stood out and made him suspicious because of many things. For example, the animal's ears did not look as if it were a zebra's, and its black paint on its face had melted away because of the heat.

Sarhan posted the photo of the poor animal on Facebook which quickly became viral all over social media. In the photo, Sarhan is seen posing next to the suspicious-looking animal, looking as if he were puzzled.

Sarhan wrote his post in Arabic in which he said that the stupidity in the country has reached a level where they brought a local donkey and painted it to resemble a zebra.

The Cairo Gardens Project director has denied all the charges that they tried to paint the donkey to pass of as a zebra. Mohammed Sultan told a news channel that the zebra is real and it was not painted.

Furthermore, he added that the animals in the sanctuary and well-taken care of and are inspected regularly to make sure that they are in good welfare. However, when a leader from animal activist group PETA reviewed the photos of the animal, he said that it was not well taken care of.

PETA Foundation Vice President Delcianna Winders told CNN in a statement that no reputable facility for animals would put an uneasy animal like a donkey to the stress of being restraint just to be able to be sprayed with chemicals such as paint. PETA added that this could even cause a painful allergic reaction to the poor animal.

The animal activist group hopes that officials in Cairo are investigating the issue. Shockingly, this is not the first zoo which attempted to fool its visitors by posing one animal as another.

In 2013, a Chinese zoo sparked anger when it tried to pass of a Tibetan mastiff dog as a lion. Not surprisingly, the "lion" even barked.

What You Need To Know About Potcake Place, A Beach Full Of Stray ...

Banksy, The Secretive Graffiti Legend, Is In Paris: See His ... 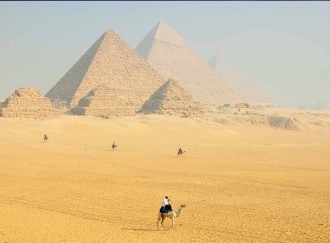 For The First Time Ever, Egypt Allows To Get Visa Online