One can now follow travel tips by a 700-Year-Old Chinese Explorer in exploring Angkor, the mysterious, prosperous capital of the Khmer Empire in Cambodia. Chinese envoy Zhou Daguan, wrote his experiences in his notes called, "The Customs of Cambodia," and today's scientists have discovered a lot of amazing things about Angkor through his writings.

It was in in 1296 AD when Zhou Daguan spent a year in Angkor as a diplomat of China sent by Chinese Emperor Temür Khan. He wrote everything he saw starting from his route to Angkor - from Wenzhou to the Tonle Sap Lake and Angkor - up to the Cambodian Justice system of paying fines or cutting off hands and feet for heinous atrocities.

Daguan wrote: "During my stay of over a year, I have seen this king go out four or five times. Every time he goes out, there are horse-mounted troops in front, and flag carriers, drummers, and musicians at the rear."

The explorer wrote 40 topics starting from the City Perimeter, Palace, and Housing, Clothing, and Jewelry, Officials, The Three Religions, The People, Women Giving Birth Going to Immigration, The Army, and, so on, finally The King's Movements Out and Into the Palace. It is said that about a century after his visit, the empire collapsed for reasons that are not yet known by researchers up to this day.

Scientists have used Daguan's writings as a way for them to unlock the mysteries of the place, as well as how tourists will get to appreciate traveling in Angkor. Scientists Solang Uk and Beling have devoted their time translating Daguan's notes to modern English, and for the first time, people can get to see the unidentified colored places, titles, plants, animals according to Daguan's observations.

So, upon hiking to see Angkor, Cambodia, tourists can get an idea of how the empire was like before. The book is now available under DatAsia Press.

Best Of Khmer Cuisine: Get To Know Some Of The Best Dishes Of Cambodia

Angelina Jolie Eats Scorpions And Tarantulas With Her Kids In Cambodia...

The Most Exotic Dishes Around The World

Interesting Facts About Ancient Cities Around The World 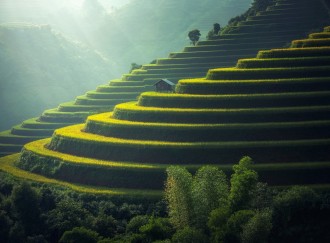