After the success of The Lord Of The Rings movies, New Zealand has been a go-to destination for Tolkien fans, as this country is where most of the films' locations were shot. One photographer decided to see all the hype himself in a six-month self-travel across the country, but he wanted something that would set him apart from others.

Amateur photographer Akhil Suhas just got out of university. He doesn't want to settle for a job just yet-he wanted to travel first. He decided to traverse New Zealand for 6 months and document the whole process, but he wanted something unique. The inspiration hit him after watching The Lord Of The Rings for the fifth time: he brought a Gandalf costume and included him in all his photos.

Who doesn't love Gandalf? One of the main protagonists in both "Lord Of The Rings" and "The Hobbit" series, including Gandalf on all pictures taken by Suhas instantly made him famous. In his pictures, he captures New Zealand's picturesque landscapes with Gandalf somewhere in the background- the models fellow travelers along the way who agreed to don the costume.

According to Suhas, "Who doesn't want to dress up as Gandalf? I tried the camera on a tripod with a timer shot, didn't work for me. So I started asking the people I met along the way if they wanted to put on the outfit." Almost everybody said yes, of course!

"I wanted a recurring subject in my photos and with so many photographers visiting the country, I figured that I needed to do something to set me apart!" Suhas added. "I was watching the LOTR for the 5th time when I figured New Zealand is famous for 2 things: its landscapes and the LOTR + Hobbit Trilogies. So why not combine the two by having Gandalf in the landscapes?"

You can check out all Akhil Suhas' pictures on his Facebook page and Instagram, with the hashtag #GandalftheGuide. He plans to travel Iceland next, and yes, he will still bring Gandalf with him. 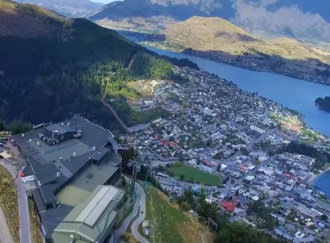 Holiday Activities: Must Do Activities In New Zealand