Fear can be a culprit and can lead to more life-threatening situations like the case of Californian Kent Jacobs Boutwell. He sued Planet Hollywood Resort & Casino in Las Vegas after he sustained injuries while fleeing a life-size mannequin which is part of decorations in his room.

In the lawsuit documents, the complainant stated that he was shocked and surprised seeing a human form when he entered his darkened room. Thinking that there was somebody wanting to hurt him, he tried to escape in fear and along the way, suffered injuries.

The object of his fear was a mannequin locked inside a glass cabinet used to advertise a brand of beer called Miller Lite, reports News. Despite the fact that the advertising prop was harmless, he sued the hotel because he suffered injuries to his limbs, body, mind, organs, and nervous system that may result in conditions leading to disability.

The complaint also alleged Planet Hollywood "knew, or should have known" that such a dangerous condition "existed on or about the premises," and therefore "had a duty to warn patrons of the existence of such a condition." Boutwell also said, "The incident had left him limited in what he could do for work and fun, including a loss of life enjoyment."

Boutwell is asking to be indemnified with the expenses he incurred in hospitalization, legal fees, future lost wages, and general damages for suffering, pain and mental anguish.

Fox News reported that the case was filed at the Clark County District Court on May 15. The owner of Planet Hollywood Resort & Casino issued a statement stating that they do not comment on the pending case but it is informing that when the hotel had a major renovation, memorabilia and decorations in the rooms have been removed.

It is now up to the court to decide if the casino has legal obligation to pay the complainant or if Boutwell be considered responsible for his injuries because of his own fears.

Lexington’s Winchester Road Old Mansion Is Featured In ‘The Wiccan...

A Cluster Of Dilapidated Homes In Indonesia Is Now A Tourist ...

Windsor Castle Guardsman Yells At Tourist Trying To Have A Photo; His ...

Middle Eastern Travels To The US Slumped; Donald Trump To Travel To ... 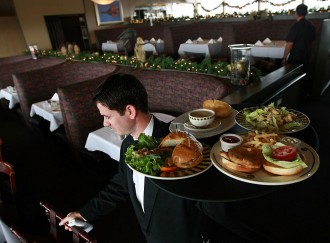