Five Most Popular Film Locations That You Can Actually Visit

Filmmakers today can make realistic worlds with just a push of a button; however there are times that you can't beat the real thing. Many filmmakers made worlds that we ourselves would like to live in. Sadly, visiting those fictional worlds are impossible but there are real sites in the world that were used directly or served as basis for a film that you can actually visit.

This iconic landmark was located at 14 North Moore Street on the corner of Varick Street in TriBeCa in New York City. The actual and fully operational firehouse served as the base of operation for the ghost hunting protagonists of the movie "Ghost Buster" as per Mental Floss. The place is now occupied by the Hook and Ladder Company #8 under the New York Fire Department firehouse. If you're planning to visit, just be careful of the on duty vehicles that will be ready to roll anytime.

The place became world famous after a man-eating fish laid waste in the area claiming innocent lives within its turquoise waters in the movie "Jaws". It served as the basis for the fictional Amity Island and is located in the real world on an island off the coast of Massachusetts accessible only by boat or air. The island is not only a summer resort but also a wildlife refuge where you can found groups of gray seals and hunting real-life great white sharks that make you doubt if the film is really a work of fiction.

The iconic hotel sits at the 265 Peachtree Center Avenue in Atlanta, Georgia and served as a shooting location for the second instalment of the hit movie series, "Hunger Games". Its beautiful interior and massive atrium was design by the architect John Portman and served as the living quarters for the heroine Catniss Everdeen and other tributes of the games. Its beautiful glass elevators and unique atrium provided the movie its futuristic vibe.

The island of Kauai provided the much tropical forest look in the "Jurassic Park" movie franchise. To your disappointment, this wonderful paradise is not full of the exciting dinosaurs however the island is rich with exotic flora and fauna. According to Rough Guides, the forest also served as the basis for the amazing computer-generated scenes of "Avatar" where the blue-skinned natives called Na'vi dwelled.

City of Cleveland in Ohio ("The Avengers")

Earth's mightiest superheroes assembled in the city of Cleveland which served as the alternate New York City in the movie "The Avengers". Iron Man, Thor, Captain America and the gang fought Loki and the alien invaders in the city's skyscrapers during the chaotic battle scenes in the movie. Cleveland's Public Square also doubled up as the Stuttgart Square where the scene Loki forced the public to kneel to him was shot.

Amazon Names The Most Romantic City in Texas

A Guide To Gaudi's Barcelona: Five Spots You Must Not Miss 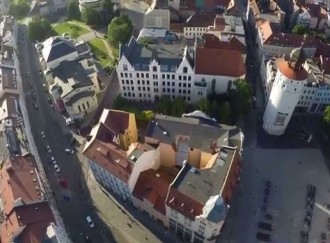 Film Locations: The Backdrop For Wes Anderson's Republic of Zubrowka ...