Gambia Is On A State Of Emergency; Thomas Cook Flies Travelers Back To The UK; Gambian Leader Unwilling To Step Down

There is a social unrest happening right now in Gambia. Thomas Cook will fly approximately 1,000 UK customers out of the Gambia after a change in Foreign Office advice was released.

Recently, Gambia has become a political battleground subsequent to last month's presidential elections. Incumbent leader Yahya Jammeh is reluctant to hand over power to the presidential election winner, Adama Barrow. The UK Foreign Office (FCO) is now advising travelers not to travel to the Gambia mentioning the current worsening political situation and the high possibility of military intervention.

On January 17, Jammeh declared a 90-day state of emergency in the country. This is his latest among series of attempts to retain power which is two days prior to his due to leave office. The outgoing Gambia leader in a televised announcement noted that he was declaring the state of emergency to prevent power vacuum and constitutional crisis. He added that he has instructed security forces to maintain absolute law and order as well as peace in Gambia.

The Guardian reported that thousands of Gambians have reportedly left the country in fear of the worsening situation. A Gambian immigration official was quoted saying that people left Gambia in fear of an impending war.

In line with these, Thomas Cook is implementing their contingency plan to bring home all 985 UK travelers they have on a holiday in the Gambia home. Earlier, the company canceled all flights to Gambia until January 20. Moreover, they will have four additional flights, are calling out around 2,500 flight-only customers in the Gambia, and give them the options of early flights back to the UK.

The latest news about Gambia reports that the Mauritanian president, Mohamed Abdul Aziz, flew into the country for last-minute negotiations on January 18, he left Gambia without Jammeh on board. The Guardian reported that on the morning of January 19, Gambia was a dissonantly quiet country. Businesses were closed and Gambians are nowhere in the streets as well as the usual tourists while Adama Barrow sworn in Senegal as the Gambia's new president.

Nanjing: The Original China; The City of Emperors

For Adults Only Desire Cruise With Steamy Themes Designed For Open-... 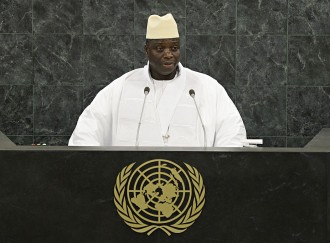