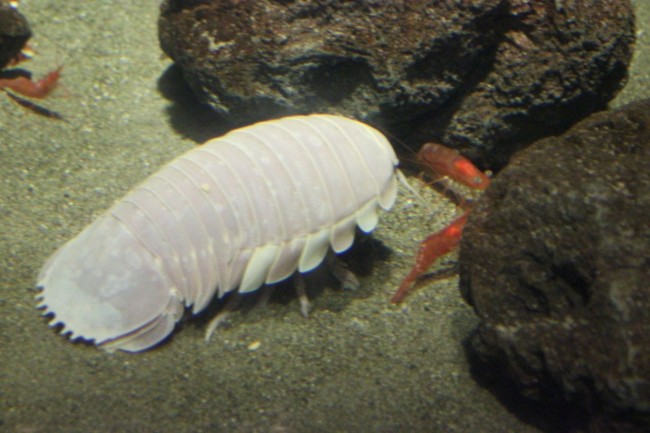 As a species, we have done a lot of impressive things. We have mapped the entire surface of our planet, climbed the tallest peaks across most continents, and even mapped out a lot of Space. We even landed humans on the moon! That is an amazing feat!

To prepare you for your Antarctic cruise, we have presented a few facts here about a certain deep-sea creature you may encounter while traveling the Southern Ocean. Because there are mysteries yet left in the world. For example, did you know that less than 10% of the oceans have been mapped?

Without further ado, here are ten fascinating things you might not have known about the Antarctic Giant Isopod!

1. It Is Not Technically a Giant

Just because it has the word giant in its name does not make it one. In reality, these creatures grow up to about 3.5 inches on average. Conditions such as low light, freezing cold water, and low oxygen stop it from growing too large. For instance, its cousin, the Giant Isopod, can grow up to 16 inches long!

2. They Only Eat Dead Organic Matter

Being a bottom feeder, Antarctic Giant Isopods have to wait for food to drop from the surface to their part of town. This does not make them picky eaters, and they will usually eat anything they can get, no matter how long it has been dead. Since it isn't often that they get a chance to eat, they will fill themselves to the brim every opportunity they get. They are typical scavengers.

3. They Have a Super Slow Metabolism

Setting up shop 2,000 feet below sea level is no joke. As we said previously, food is hard to come by, and these creatures have adapted by expending as little energy as they can. Unless they meet a predator or a meal, they will move as little as they can in an effort to last as long as they can without food. They have been recorded living almost eight weeks in this manner without needing food.

Despite looking the part, these creatures are not insects. Far from it, in fact. The Antarctic Giant Isopods belong to a group of animals called crustaceans. This means they have more in common with crabs, shrimp, lobsters, prawns, krill, crayfish, barnacles, woodlice, and pill bugs. So, keep the bug spray at home!

5. They Are Excellent Swimmers

You bet the Antarctic Giant Isopod puts its spiny legs to good use! Not only is it capable of swimming upright and straightforward, but it also has some tricks up its sleeve. They can also swim upside down. Yes. They do that. Nobody really knows why they do that, but they can, and they will. If you encounter one swimming upside down, know that you've seen something spectacular.

6. They Navigate with Their Antennae

Due to living in low-light conditions, the Antarctic Giant Isopods have to rely on their two sets of antennas to guide themselves. In addition to the antennas, they have a pair of fixed compound eyes, like an insect. Of course, due to reading in the darkest, murkiest depths of the ocean, these eyes are and functionally useless.

7. They Have Glowing Eyes, Even If They Can't See

Despite being useless, their eyes reflect back any and all visible light. When light falls on them, a special part of their retina called the tapetum reflects it right back, creating a glowing effect. This phenomenon is observed in many species of animals, and it an evolutionary tool to help vision in low-light environments.

8. If They Roll into a Ball, Back Off

Antarctic Giant Isopods employ a defense mechanism that involves rolling into a tight ball to protect themselves from predators. They will unroll only when the predator moves away. If the threat persists, and if their tough, scaly exterior doesn't deter it, they will utilize their two pairs of jaws. That's right, two pairs of jaws.

9. Back off Even If They Raise Their Legs at You

The Antarctic Giant Isopod has three pairs of small legs, as well as four pairs of larger, spiny legs. Not only does this large collection of limbs help it swim, but it also comes in handy for threat display. If presented with a dangerous foe, these creatures splay out their limbs in an effort to look as large and intimidating as possible to scare predators away.

10. The Females Protect the Eggs

Of all marine invertebrates, Antarctic Giant Isopods have the largest eggs, measuring up around 1.3 cm in length. The females of the species carry these eggs in a pouch until they are ready to hatch. To protect these eggs from predators, the females will burrow into the soft, sandy sea beds and wait until the eggs hatch, making full use of that slow metabolism.

The Giant Antarctic Isopod or Glyptonotus antarcticus, though it strikes an intimidating figure, is a largely inoffensive animal wholly concerned with finding its next meal. It is one of the many incredible lifeforms that call the deep ocean floor its home. Should you encounter it, treat it with the wonderment it most definitely deserves.